Call Us For Free Consultation 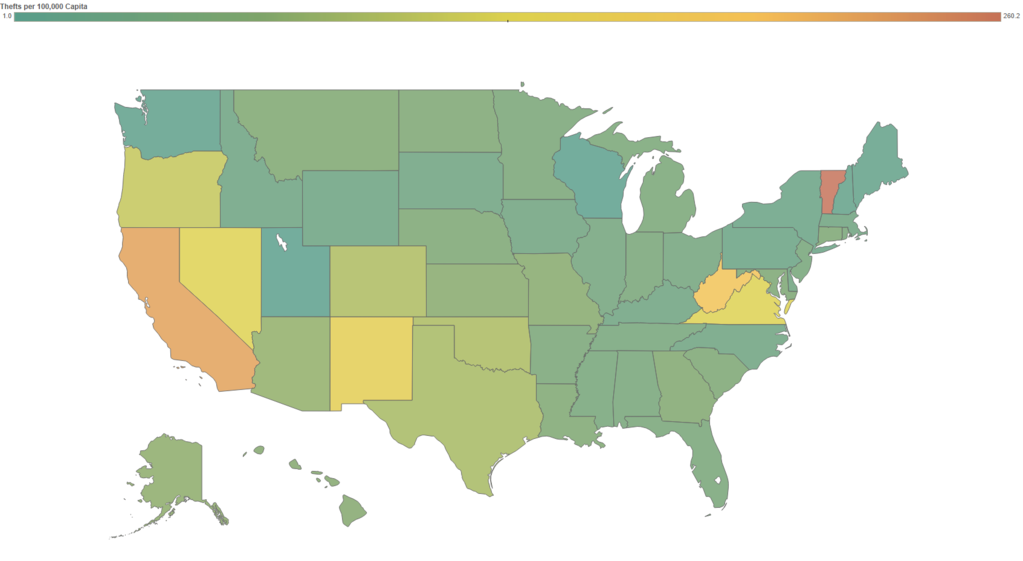 With modern technology, today’s anti-theft features that protect our investments are absolutely incredible. With the press of a button, or the use of an app, we can protect our belongings and feel safe and secure.

However, in spite of all the technological advancements we take advantage of today, it is still a reality that your car could be stolen.

As a result, 58 percent of Americans rarely or never worry that their car will be stolen, according to a 2014 Gallup poll.

While a decline in car theft is a good thing, it’s becoming evident that people throughout the U.S. are simply making the assumption that their cars cannot or will not be stolen. But this is not the case.

This article will discuss The Top 10 Most Stolen Vehicles in the U.S. along with states that have the highest and lowest vehicle theft rates per 100,000 residents. 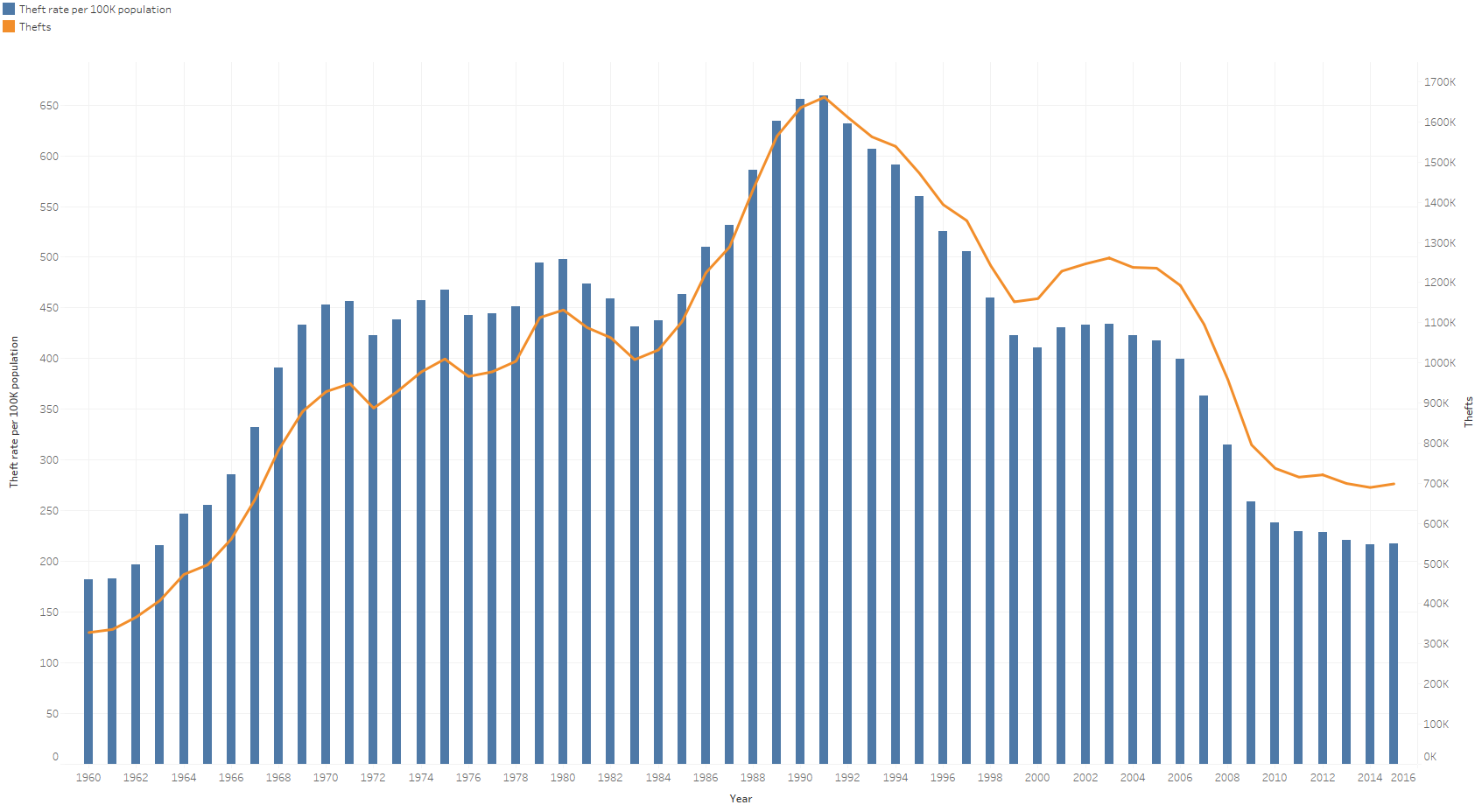 The data for this study was gathered from the following sources:

Each source provided the following information for our research:

Overall, our study and ranking system for 2017 is based on researching the four following categories: 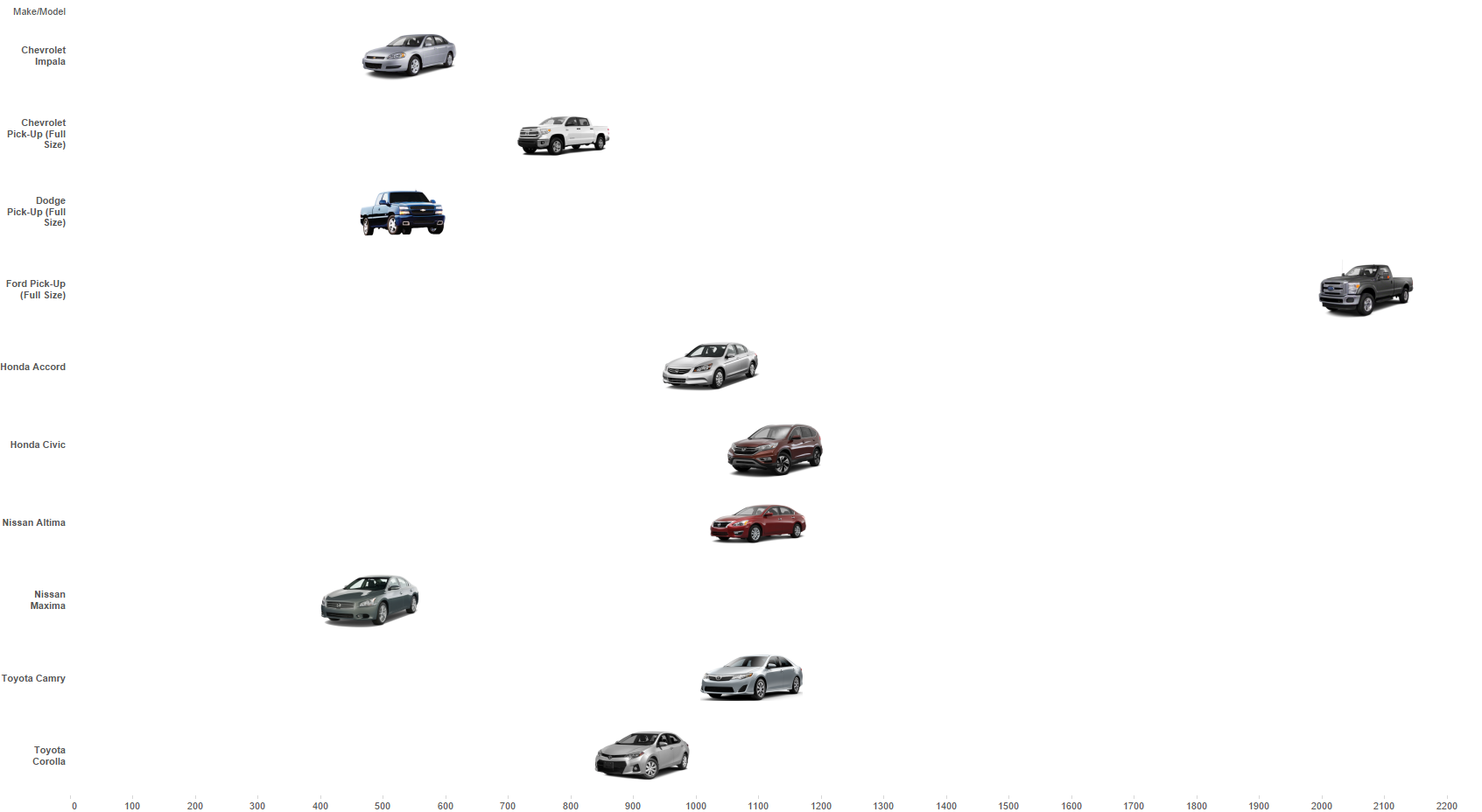 You may be wondering what the likelihood is of your car being stolen where you live; luckily, we’ve got you covered!

You’ll be able to review theft statistics in all 50 states — plus the District of Columbia — along with the specific makes and models of vehicles that are most likely to be stolen (click here to see all 51 locations’s statistics and vehicle types).

How Many Stolen: 5,330
Highest Ranking by State: #4 in Washington

The Integra was one of the launch models for Acura in 1986 and was produced by Japanese automobile manufacturer Honda until 2006. Throughout its life, the Integra was highly regarded for its handling and performance.

Each generation of the Integra was derived from the design of the Honda Civic. The Integra featured a larger engine and lower ride height; on the Type-R model, a sunroof and modified GSR engine were standard equipment.

The 1994 model was, and still is, a favorite among thieves, as ninety-six percent of all the Acura Integras stolen in the U.S. were manufactured in 1994.

How Many Stolen: 5,345
Highest Ranking by State: #4 in California

The 1991 Toyota Camry falls into the V30 model category, which as of September 1991, featured a wider body compared to previous Camry models.

Since the release of the wide-bodied versions, Camry has been extolled by Toyota as the firm’s second “world car” after the Corolla.

The Toyota Camry has definitely left an impression, even on thieves; as a whole, 14,791 Toyota Camrys were stolen in the U.S. in 2015.

How Many Stolen: 5,771
Highest Ranking by State: #1 in Massachusetts

The Honda Civic is a line of small cars manufactured by Honda. The 2000 model is considered to be the last in the line of the sixth generation of Honda Civics.

The sixth-generation Civics featured updated styling for the interior and exterior.

The Civic is popular as a platform for modification and customization by the enthusiast community. Starting with the fourth generation and continuing through the 2000 model year, Civics had front double wishbone suspension and rear semi-trailing arm suspension.

Considering how easy it is to modify and change parts for the Honda Civic, it makes sense that thieves are also fans of this car. The Honda Civic had the second highest number of thefts in the U.S. at 47,967.

How Many Stolen: 6,491
Highest Ranking by State: #3 in New York, Maryland, Massachusetts, Alabama, and Rhode Island

There are five states in the U.S. that rank the 2014 Toyota Camry as the third most popular car to steal. Here’s a closer look at each state’s statistics:

The 2014 Toyota Camry is an extremely practical vehicle. It delivers solid performance and fuel economy, has a spacious interior, and earns high safety and reliability ratings.

How Many Stolen: 7,579
Highest Ranking by State: #1 in Louisiana

The full-size Chevrolet Pickups from 1999-2007 came in two different models: the Silverado and the Sierra. In 2000, heavy duty pickups were introduced, and from 2002 on, all Chevrolet pickups had a slight design change and an upgrade to the audio and HVAC controls.

It makes sense that a pickup truck is the most stolen vehicle in Louisiana. According to a Census Bureau survey in 1997, Louisiana had about one pickup truck for every six people.

While the data from 1997 is undoubtedly outdated, considering that the Ford F-150 is considered the most popular car in Louisiana in 2017, the popularity of pickup trucks in Louisianna doesn’t seem to be changing much.

Full-size pickup trucks make up four out of the 10 most stolen vehicles in Louisiana:

Enter your ZIP code below to view companies that have cheap auto insurance rates.

Pickup Trucks and the South typically go hand-in-hand, so it makes sense that the 2004 Chevrolet Pickup is a favorite among thieves in Arkansas, where 402 were stolen.

Overall, the Full-Size Chevrolet Pickup had the fourth highest number of thefts across the U.S. at 27,528.

The Honda Accord has been one of the best-selling cars in the United States since 1989. For the 1997 model, Honda released the “Special Edition” version of the Accord, with features like:

Despite having a security system, the 1997 Honda Accord — with all its special features — is very appealing to thieves. The fifth generation of Honda Accords (1994-1997) is one of the most frequently stolen cars in the U.S.

It’s no surprise that the Ford Pickup is #1 for car theft in Texas as the Ford F-150 is also currently the most popular car in Texas. The Ford F-Series has also been the best-selling vehicle in the United States since 1981 and the best-selling pickup since 1977.

The 2006 Full-Size Ford Pickup belongs to the 11th generation of the Ford F-series (2004-2008), which had sharper-edged styling compared to its predecessor along with the stepped driver’s window from the Super Duty trucks.

Acclaimed for its handling, the 1996 Accord has been known as one of the best handling Japanese midsize sedans of all time.

The 1996 model also had a “facelift,” implementing rounded bumpers, which gave it an overall softer look.

The Honda Civic has always been a top seller, with 7.3 million bought in the United States as of 2015. Due to its low price and small size, it is also the most popular car among Millennial car shoppers.

So, if you are the proud owner of a Honda Civic (more specifically the 1998 model), keep an eye out for thieves and do your best to keep your car from being stolen.

10 States With the Lowest Vehicle Theft Rates Per 100,000 Residents

10 States With the Highest Vehicle Theft Rates Per 100,000 Residents

Not What You’d Expect

Of the 10 cars on our list, Honda occupied half of the spots:

Part of the issue, as reported by Esurance, is that Honda’s ignitions are similar making creating a master key for several years of older Hondas easier than other models. Toyota made the list twice (both models were Camrys – 1991 and 2014).

These may not be the type of vehicle you’d think a thief would steal, but if you drive one of these cars, you should know the facts. It’s also worth noting that only one of these cars was newer than 10 years old. Thieves preferring older cars is a trend that continued from last year’s study as well.

Understanding these trends should make drivers of these vehicles consider how to protect their vehicles. Even just applying a few common sense tips from below could prevent your vehicle from theft.

You cannot become complacent when it comes to the safety of your cars. Instead, you need to take the necessary precautions to safeguard your vehicles against theft.